The explanation (below) first appeared in the July/August 2000 issue of JUGGLE magazine. JUGGLE is the official publication of the International Jugglers' Association.

Rick Rubenstein, co-founder of the juggling duo Clockwork, is credited with coming up with this fascinating three-ball variation. The subtleties of the pattern are so great that Rick confessed to not actually be able to juggle the pattern for a great length of time. It turns out that what Rick came up with was slightly different than the version which was popularized with his name. It took Rick a while to modify his pattern, and be able to proudly demonstrate what's thought of as the true Rubenstein's Revenge.

There are a total of six throws and catches for a complete cycle of Rubenstein's Revenge, three throws on one side, and the mirror image of those three throws on the other side. The order is a standard right, left, right, left throwing sequence. Each ball flies in its own distinct flight path and each ball is always thrown from one hand to the other. Not only do the arms constantly cross and uncross, but the hands circle around each other in both clockwise and counterclockwise directions.

Because people learn patterns in different ways, several different approaches are given here. Try them all to see which work the best for you. It may turn out that attempting the different methods will have a cumulatively beneficial effect that will result in learning Rubenstein's Revenge more quickly.

Surprisingly enough, one good pre-exercise for juggling a smooth Rubenstein's Revenge is to practice a Forward Cross-Follow pattern while club or poi swinging. The winding and unwinding of the wrists in club swinging is very similar to the hand motion of Rubenstein's Revenge.

More directly, you also get a sense of the crossing and uncrossing of the arms while juggling Mills Mess. In fact, Rubenstein's Revenge can be thought of as a continuation or extension of Mills Mess.

Steve Healy, known by many as JAG, suggests that people try this warm up with just two of the three balls to practice the complicated clockwise and counterclockwise arm circles of Rubenstein's Revenge./p> 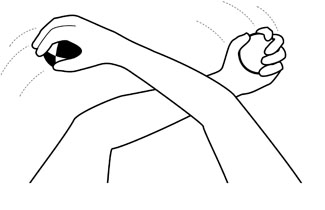 Moving both arms in a clockwise direction, invert your arm positions so the right arm is crossed below the left, palm up. Throw the striped ball straight up, or, even better, slightly back into the center. Still holding the white ball, continue swinging your left hand clockwise out to the left, under the striped ball.

The right hand claw catches the striped ball after crossing over the left hand. The left hand catches the white ball palm up. This puts you back in the original position to start over again.

The black ball follows the same U-shaped pattern that you juggle for one of the balls in a Mills Mess.

Catch the black ball when the arms are open and throw it to the other hand straight up or slightly back into the center in an underarm, crossed arm reverse cascade throw. Remember, the black ball flies mostly below the other two balls in its distinctive U-shaped pattern.

The Sequence of Six Throws for Rubenstein's Revenge< 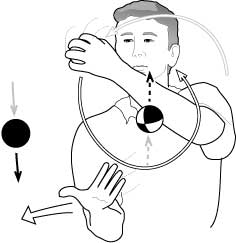 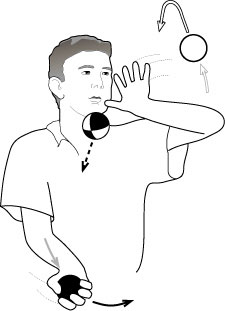 With the right arm once again crossed under the left, throw the black ball in an underarm reverse cascade throw from the right hand to the left. Catch the white ball in the now empty right hand. You are halfway through. Now it s time to do the same thing the other way. (see third illustration) 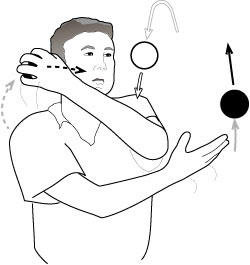 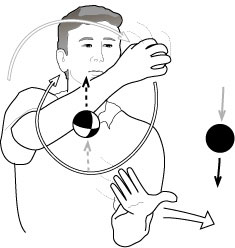 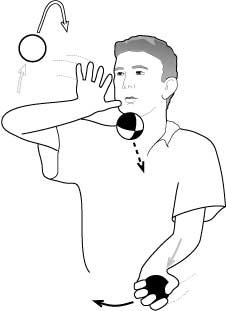 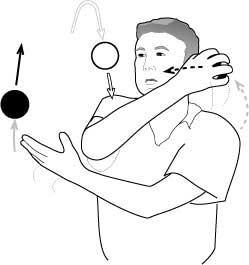 Some Observations on Juggling Rubenstein's Revenge

In my experience, this is one of the more complicated three-ball patterns. Not having a clear idea of how to break the steps down, it took me several years to feel comfortable juggling this pattern. Please be patient and take pride in your progress. The skills you are learning will come in handy for other variations, as well.