Imagine a yo-yo that can fly! That's the fun you can have with a diabolo. This ancient toy originated in China. Recommended for ages eight and up. 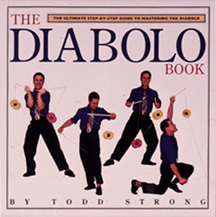 Over sixty tricks, fully illustrated, and a great history chapter; folks seem to like it. 85 pages, $14.95

Todd Strong's "The Diabolo Book" should serve as a model for everyone interested in writing a juggling book...Strong's writing style is clear and to the point...

However, the thing that really sets this instruction book apart from others is Strong's extensive essay on the history of the diabolo. Juggler's World

Currently out of stock of The Diabolo Book. Will update this page if new copies come in.

These durable diabolos consist of two rubber cups attached to a metal axle. Diabolos measure fourteen centimeters across with a diameter of eleven centimeters (aprrox. 5 1/2" X 4 3/8" ). Flexible plastic handsticks bend instead of breaking.

Please note: Only have few of the purple sets left in stock. When these are gone, I will no longer be sellling diabolos.

Special Diabolo Deal: Order a diabolo set with The Diabolo Book and get a package price, $22 for both.

Currently out of stock of The Diabolo Book. Will update this page if new copies come in.

Review originally appeared in the Spring 1995 issue of Juggler's World magazine. Reprinted with permission of the publisher.

Todd Strong's "The Diabolo Book" should serve as a model for everyone interested in writing a juggling book. The author combines a large helping of instructional material with a rich portion of prop history, and leavens the mix with just a tiny bit of psychology and philosophy.

It's overwhelmingly just the facts - the facts of how to learn diabolo manipulation from ground zero to complex tricks, and the fascinating facts of its fairly well documented history.

Strong's writing style is clear and to the point, splashed with enough appropriate humor and author's personal comments to give the book personality. Good writing rises or falls on the artwork that supports it, and this books stands tall because of its attractive line drawings, photos of contemporary artists doing diabolo, reproductions of turn-of-the-century diabolo post cards and four-color soft cover. The clean layout and ample illustrations make it fun to keep turning through its 90 pages.

The heart of the book, as the author states, is the "tricks" section. He presents about 45 tricks in the order that most people learn them, beginning with throws and catches and advancing all the way to two diabolos. Dozens of simple, realistic pen and ink drawings of the author performing the trick, or closeups of the stick and string arrangement, clarify the associated text.

A subsequent short section describes passing, steals and pass-alongs with a partner.

However, the thing that really sets this instruction book apart from others is Strong's extensive essay on the history of the diabolo. The author takes appropriate credit for helping popularize the diabolo with this generation of jugglers, but from the beginning of his involvement with the diabolo in 1980 it has been for him a scholarly pursuit as well as a physical one. The book originally began as Strong's master's thesis, and he lists more than a dozen libraries at which he conducted research during the course of its writing. His teaching credits include appointments at Die Etage school in Berlin and at the Centre National des Arts du Cirque in France. The weight of this academic research and Strong's years of experience as a teacher give the book an authority not found in most juggling books.

Though no skill or prop can be traced to an absolute beginning, Strong makes a good case for the origin of the diabolo in ancient China. His research uncovered interesting stories of its appearance in Europe in about 1790, brought back from the Orient by statesmen and traders. He digresses at that point into a discussion of the "diabolo" that should establish once and for all how the name came to be.

The history of the prop continues through its use as a rich person's toy in the early 1800s, then as a national passion in France in the early 1900s, complete with local clubs, tournaments and a team lawn game similar to tennis.

The diabolo's third Western renaissance has been spurred in the past decade by jugglers adding it to the inventory of their manipulative skills. The appearance of Strong's comprehensive and attractive book puts the art on a high pedestal this time around!

The following review originally appeared in the Winter 1994 issue of Kaskade, the European Juggling Magazine. Reprinted with permission of the author, Wolfgang Schebeczek, and the publisher.

It's taken two years for the English edition of Todd Strong's Diabolo - Spielend lernen to appear. But here it is at last, and despite the not entirely original title (see Jack Wiley's book on the same subject), it has been worth waiting for: the original book has been reworked and expanded. On the tricks and techniques, you can read all you need to know in the review of the German version (Kaskade No. 26, p. 35), because little has changed since then, content-wise. But a number of anomalies have been cleared up in the historical section. In particular, the references to other literature, which caused me problems in the past, have been licked into shape and are now useable. The most mentionable aspect of the English edition, though, are the new visuals. The historical photos documenting the diabolo boom around the turn of the century are especially interesting. Many of the pictures are taken from Todd Strong's private collection of vintage postcards.

The world of diabolo has moved on since the German edition first appeared. But to my mind, Todd Strong's book is still the best introduction for newcomers. Only Ralf Runde's Das grosse Diabolobuch comes close to it. And nothing compares with Todd Strong's survey of diabolo history. Which is one of the reasons why I predict that this book is destined to become a classic. If you're undecided about whether to choose the English or the German version, I suggest you get The Diabolo Book.

This short clip is an extract from Abel Gance's 1927 film, Napoléon. This scene shows Josephine's two children, Eugène and Hortense, waiting to meet Napoléon for the first time. Eugène is seen spinning a diabolo. The film appears to be historically accurate, as diabolos were a popular pastime during the time depicted in the movie. 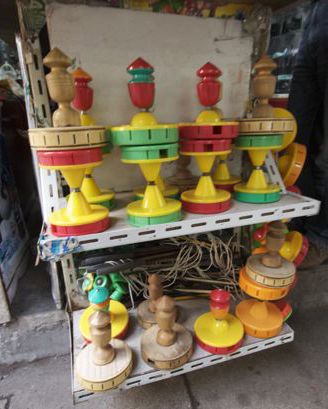 Photo taken by David Aiken, The Checkerboard Guy, in of a street scene in Nanjing, China.

Above is a GIF animation of what may be the first recorded variation with two diabolos.

In 1986 or '87 Michael Genahr mailed me a series of photographs showing him demonstrating a reverse in the normal shower of two diabolos. He hand numbered the photos, drew in some arrows to show directions, and wrote a brief description of what he was doing on some of the images.

Image 5: the yellow goes under the blue almost by itself. The blue "jumps"

Image 6: to the left string and the "turning direction" (?)

Image 7: changes! This is the very moment were both D's stand still.

Image 8: to throw the blue without hitting the yellow is somewhat difficult