A.A. Milne is most famous for writing the children's book Winnie-the-Pooh. He also wrote humourous articles for PUNCH, OR THE LONDON CHARIVARI when there was a diabolo craze in Europe. This piece is an example. I believe it was published in October of 1907 or 1908. My copy of PUNCH is currently in storage.

The transcription for this piece by Milne is below. The right side did not reproduce clearly. I will have to check with the original to make sure the transcription is accurate. 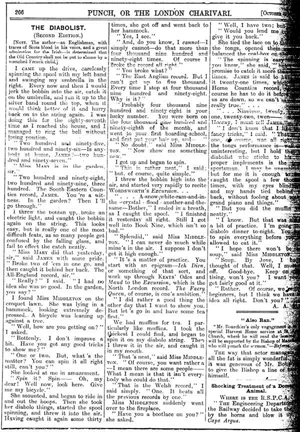 PUNCH, OR THE LONDON CHARIVARI.

[Note, The author—an Englishman, with traces of Scots blood in his veins, and a great admiration for the Irish—is determined that the Old Country shall not be put to abuse by a wretched French child.]

I CAME up the drive, carelessly spinning the spool with my left hand and swinging my umbrella in the right. Every now and then I would jerk the bobbin into the air, catch it on the umbrella, and run it up to the silver band round the top, when it would think better of it and hurry back on the string again. I was doing this for for the eighty-seventh time as I reached the house, and I managed to ring the bell without losing position.

"Miss Mary is in the garden, sir."

I threw the bobbin up, broke an electric light, and caught the bobbin again on the string. This looks easy, but is really one of the most difficult feats, as so many people get confused by the falling glass, and fail to effect the catch neatly.

"Miss Mary did that yesterday, sir," said James with some pride. "Broke two of 'em in one go, and then caught it behind her back. The All-England record, sir."

I found Miss Middleton on the croquet lawn. She was lying in hammock, looking extremely depressed. A bicycle was leaning up against a tree.

"Well, how are you getting on?" I asked.

"Rottenly, I don't improve a bit. Have you got any good tricks to show me?"

"One or two. But, what's the matter? You can spin it all right still, can't you?"

She looked at me in amazement.

She mounted, and began to ride in and out the hoops. The she took her diabolo things, started the spool spinning, and threw it into the air. Having caught it again some thirty times, she got off and went back to her hammock.

"And, do you know, I cannot— I simply cannot—do that more than four thousand nine hundred and ninety-eight times. Of course I broke the record all right."

"The East Anglian record. But I can't get up to five thousand. Every time I stop at four thousand nine hundred and ninety-eight. Why is it?"

"No doubt," said Miss Middleton. "Now show me something new."

I got up and began to spin.

I threw the bobbin high into the air, and started very rapidly to recite Wordsworth's Excursion…

";… A•snow•white•ram•and•in•the•crystal•flood•another•and•the•same—Bother,” Iended in a breath, as I caught the spool. "I finished it yesterday all right. Still I got well into Book Nine, which isn’t so bad.”

"Splendid," said Miss Middleton. "I can never do much while mine's in the air. I suppose I don't get it high enough."

"It's a matter of practice. You can start with an epigram—Ich Dien, or something of that sort, and work up through Keats' Odes and Maud to the Excursion, which is the North London record. The Faery Queen, of course, is one's ambition."

"I did rather good thing the other day that I want to show you. But let's go in and have some tea first."

We had muffins for tea. I particularly like muffins. I took the thickest I could find, and began to spin it on my diabolo string. Then I threw it in the air, and caught it in my mouth.

"That's neat," said Miss Middleton. "Of course, you want rather a—I mean there are some people— What I mean is that it isn't everybody who could do that."

"That is the Welsh record," I said simply. "One. It beats all the previous records by one."

Miss Middleton suddenly went over to the fireplace.

"Have you a boot lace on you?" she asked.

"Would you lend me one if I give it you back?"

She tied the lace on to the tongs, opened them, and balanced the coal-box on the lace.

"I don't know that I like the fancy tricks," I said. "That one, of course, was all right, the tongs performance is—well, not uninteresting, but I hold that the diaboloist who sticks to his proper implements is the true sportsman. I may be unambitious, but for me it is enough to have caught the spool a few thousand times, with my eyes blinded, and my hands tied behind my back, without fooling about with grand piano and things."

"But you did the muffin so neatly."

"I know. But that was after a bit of practice. I'm going to a diabolo dinner to-night. You have to spin everything before you are allowed to eat it."

"I hope there won't be any soup." said Miss Middleton.

"Soup. By Jove, I hadn't thought of that. Well, I must be off. Good-bye. Keep on practising, won't you? I want you to get fairly good at it."

"Rather. Of course, we're just beginners, but I think we have an idea all right. Don't you?"

Orders are usually shipped once per week, at the end of the week. The next batch of orders will be shipped by Friday, May 15, 2020.